The community kite fly day has come and gone.  An unwanted guest showed up and caused a cancellation.  The guest’s name — FLORENCE.  Hurricane Florence brought two days  of high winds and three days of rain.  And evacuations and curfews which kept us from the beach.  Even though I had thoughts of taking my Flexifoil out and flying in the higher winds.  Of course, no one would go with me.  And I had no re-entry pass to get over the bridge to the beach after Florence passed.

So let’s go back to a better time when we got together with a group of kite builders for a weekend of building.  The Keystone Kiters  Club of Pennsylvania sponsored a kite building workshop in the month of August.  The workshop is a major trip from North Carolina for a weekend but it is also a time of sharing and learning.  It can get intense. 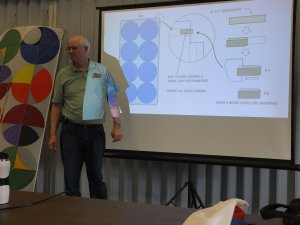 This year we built a modified edo designed by Mike Mosman, an American Kitefliers Association Grand Champion Kite Builder.  The sail designs were completed at home so the weekend would be preparing and framing the kite.  I had a vision of what I wanted this kite to look like.  And I tried a different technique of appliqué.  After several evenings of sewing the sail was complete.  At the workshop, it took both days to hem, attach the cross-spars and vertical spars and bridle the kite.  The bungee cord arrangement for the vertical spars and the cascading bridle were new constructions for me.  That’s one of the reasons to travel to these workshops – to learn new construction techniques.  Especially those that you would never think of or figure out on your own.

The end result is a kite that flies beautifully, looks the way I had imagined it would and has stitching I’m proud of.  The kite is named “The Koi Pond”. 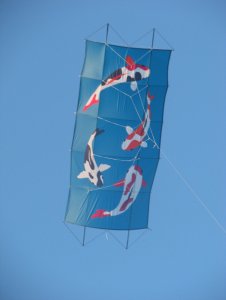