The community kite fly this past weekend was canceled because of too much wind.  Most people do not understand that you can have too much wind which results in broken lines and broken kites.  And there is a portion of us flyers that do not like being dragged down the beach by a kite.  Instead of flying, I set myself an impossible project – to build a train of five kites by the time the Carolina Kite Festival occurs.  This gives me six days.  The kites I plan on building are a variation of a plan I saw online.  I’ve changed the kites outline, am using fiberglass instead of bamboo and adjusted the flat kite with a dihedral to give it some bow.  I have no idea if this will work.

The kites will be yellow with black appliqué.  The patterns come from some images I found on the Internet.  The kites are small, five-sided and meant to dance around in the sky.  They will be ultimately flown on a single line with branches out to the side so they can move without entangling each other.

Four different designs are appliquéd on the kite skins.  They are enlarged using an opaque projector to a size that will fit the kite.  The theme is honey bees.  So the first and middle kite will be a single large bee. 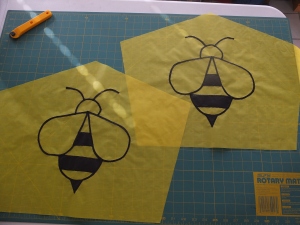 It actually took only two and a half days to get all the skins stitched.  The designs are rather simple so that made things easier.  The next step was to decide to hem or to edge bind.  Edge binding gives the kites a black outline which will set them off in the sky.  And then there were six pockets to sew on each kite to hold the fiberglass rods which form the frames.  Pockets take longer than anything when making a kite.  Especially when there are special folds to make each pocket fit closely in each corner. 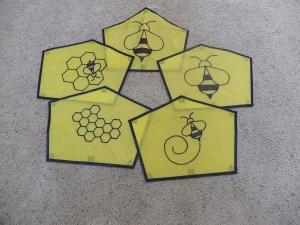 I framed one kite and tried to test fly it before doing all five kites.  The winds were terrible so a good test flight was impossible.  But I did find out that tails will probably be necessary.  So I spent one evening making zig-zag tails.  These are similar to a fuzzy tail and provide more drag than a simple straight tail.  They are also easier to make than fuzzy tails.  There still is framing to do on four of the kites.  My job for tomorrow.  And I’m planning on doing some more test flying between tomorrow’s rain showers.  Here’s hoping I get it all done and they fly well for the upcoming festival.

This past weekend I was on Ocracoke Island, NC for a photography workshop.  The weather was the best we had had for several weeks.  Sunny, warm and with moderate breezes.  I really hated missing the community kite fly.  I also hated the thought of not doing any kite flying at all.

Not really knowing what the schedule was going to be for the weekend, I still threw some kites in the back of the truck.  Who knows, there might be some free time during the weekend.  And, heaven forbid, I not go to the beach at some point.  So it was that on Saturday I skipped lunch with the workshop participants and took myself to the beach for a “kite fix”.  Since I wasn’t going to have a lot of time, I left the stunt kites behind and only took a couple of the smaller single-line kites.

The wind was coming from the east which meant it would be rather turbulent coming off the dunes and going to the ocean.  The first kites up were a train of tropical bird kites by Into The Wind Kites.  There should have been three but one needed some repair so only two made it into the sky.  The only other kite to fly was my Drumbox kite.  All the kites would go up for a while and then settle to the sand.  But I made the best of it. 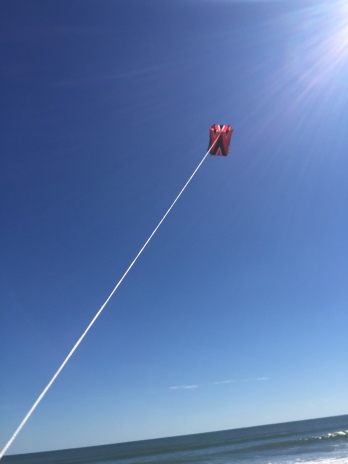 While I was loading everything back into the truck and preparing to rejoin the photography group, a gentleman walked up to me in the parking lot.  He told me he and his wife enjoyed watching the kites and appreciated my efforts.  This made me feel so good.  And just re-affirmed that a short kite fly is better than no fly at all. 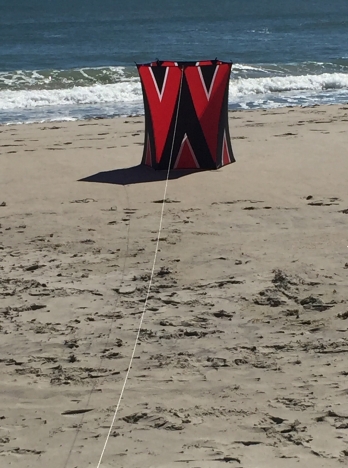 A beautiful day and some time away from the aftermath of Hurricane Florence.  The sun shone and the clouds moved across the sky.  It was the first kite flying day of the autumn but the temperature was more like the summer.  Hot!!  The beach had changed dramatically.  A lot of the dunes were worn away by the waves and the rocks that usually provided a place to set our kite bags were buried in the sand.  A lot of the beach grass was also gone.

On the bright side, the wind was good and it felt so right to be flying again.  The variety of kites in the air was amazing considering there were only five of the regular flyers present.  I put up the Brasington Stealth Delta from this summer’s workshop.  It flew quite well, even when the wind changed direction and strength.  I tried to fly the modified edo I call the Koi Pond.  It didn’t care for the lighter winds and so I was unable to anchor it and move on to flying a stunt kite.  And I need the practice.

It was a shame there were so few people walking on the beach to see the kites.  Several were whimsical and guaranteed to draw smiles.  Who can not smile upon seeing a flying hippo.  Others were guaranteed to fly no matter what the wind would do.  And then there were a couple that kept the flyers hopping as they went up, drifted down and had to be put up again.  Anyone who thinks kite flying is a passive sport never tried to fly on a day of changing wind

In between tending kite lines, there was talk of the upcoming kite festival.  Especially some of the obstacles that have the potential to effect the number of flyers present and the number of spectators.  The one thing there was no talk of was canceling the event.  Just as the kites adjust to the whim of the wind and fly, so the flyers will adjust to the circumstances and fly, fly, fly. 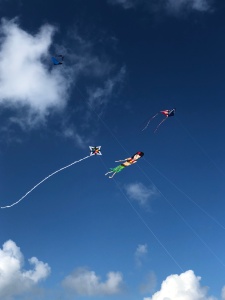 Fort Macon State Park is open.  Although the fort itself is closed because of damage from Hurricane Florence.  The early report concerning the weekly community kite fly was encouraging but we couldn’t verify the information because we weren’t there.  Whereas kites are important, grandchildren are more important.  And our youngest granddaughter turned three.  There was no way we were going to miss the party.  As seems to be the rule, the day was perfect for kites and we were absent.  No doubt we will hear about it when we stop at the kite shop.

The good news is the Carolina Kite Festival will go on as planned.  It will probably have a different “feel” than other years because of the hurricane recovery.  We have no idea how many participants can or will come nor what kind of accommodations will be available.  But there will be color in the sky and camaraderie on the sand.  Of that we can be sure.