We spent the Labor Day weekend at the Mile High Kite and Craft Festival in Beech Mountain, NC. This tiny town of about 350 people has hosted this festival for the past twelve years. We’ve attended the last six. It is a gathering of kite people from several neighboring states and kite clubs. The weather hasn’t always cooperated but the fellowship has been good regardless.

This year it didn’t rain. Yeah!!!!! But the wind didn’t attend either. Saturday was an open fly and a kite builders competition. The chamber of commerce was giving away small sled kites to the children attending the festival. After decorating the kites, there were a lot of kids and adults running up and down the side of the mountain getting their kites to fly. There were a wide range of kites brought from home or purchased at the vendors’ booths. Whether the kites would fly or not, there were still a lot of smiles all day. 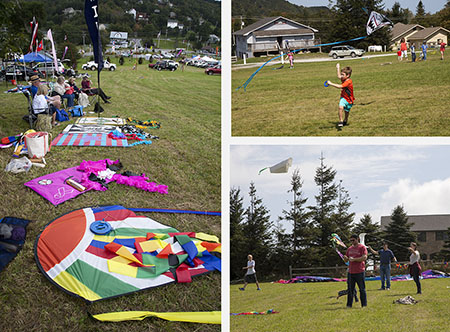 There was just enough wind for the entries in the competition to fly for the judges. Five kites were entered in three categories. The most competition was in the Flat-and-Bowed category with three entries. The other categories, Soft Kite and Stunt Kite, had one entry each. All kites were judged for the benefit of the builders. After flying, the judges went over each kite with a fine-toothed comb, asking questions and giving advice on what was good and what needed improvement. For me, that was the best part. I learned a lot. The winning kite of the day was my Fled entitled “Smile” 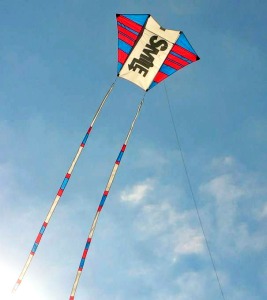 Sunday was the official festival day. The sound system was set up, banners and ground displays lined the demo field, and the flyers were ready to put on a show. But, again, the wind decided not to show up. All the kite fliers pulled out their light wind kites and tried to get things up in the air. And, again, kids and families were running up and down the mountainside with all manner of kites. Some flew for a bit and some were just dragged along the ground. Yet, there were still smiles on faces all day. During the dead calm times, there were boll races for young and old and giant soap bubbles floating across the field. There were three remarkable demos performed on Sunday. One was a ballet using a white indoor Rev, another was a pairs stunt kite ballet and the third was a ballet using a standard Rev (the flier spent a lot of time walking backwards). Amazing feats in little to no wind. One enterprising young man ran up and down the mountain pulling his giant octopus behind him. It should be noted he only did it once. 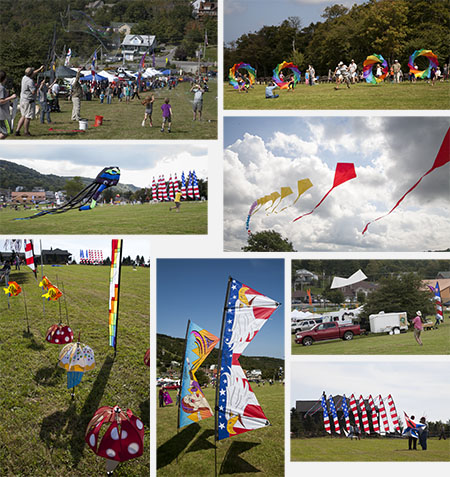 I did fly my Dunton-Taylor box and my sport kite, Wisp II, a few times. The Skate wouldn’t go up and we didn’t think to pull out the Laima. In between flying attempts, we visited with old friends and met new ones. From our point of view, it was a great weekend. We’re looking forward to next year on Beech Mountain. 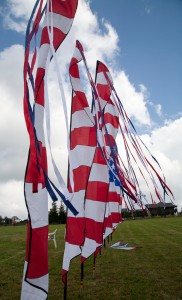