The Independence Day weekend was hot and crowded.  As this holiday was on a Monday, we had the red/white/blue fly on our usual club fly day, Sunday.  This also kept us out of the insane traffic a second time.  And it was so hot, a second trip to the beach was not desirable.  Okay, maybe it was desirable for those who don’t live here and only have a chance to get to the beach on holidays.

While there were only a few flyers in attendance, there was a large variety of kites in the air.  All but two red, white and blue.  They included four deltas, a flowform, a powersled, two Joel Scholz eagles, a parafoil and a sky skimmer.  The blue delta had the space shuttle on it which made it patriotic enough for the holiday.  The other non-RWB kite was the black skeleton, being flown by special request.

After the single line kites were up and anchored, the stunt kites came out to play.  Not a large number of kites but a sampling of the different types, from dual line to quad line to a stack of Hyperkites.  Two of the stunt kites were vintage, a Star Dart and a Spirit Quad.

To complete the show for this Independence Day, there were a couple of banners placed on the beach.  Actually one was a banner and the other was a Masterpiece Rev that was created by Randy Tom.  One by one the flyers had enough of the heat and packed up and headed for the air conditioning.  There was satisfaction in that we had put on an appropriate display for this Independence Day. 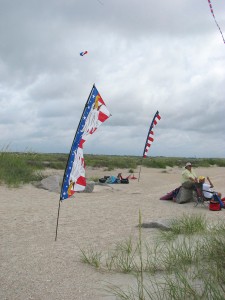 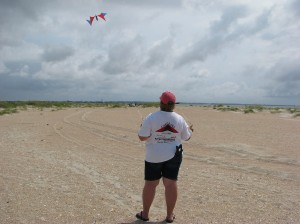 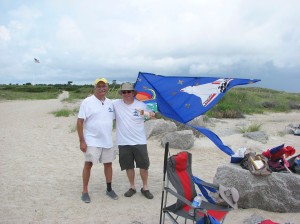