Father’s Day turned out to be a beautiful day to fly kites on the beach.  The temperature was lower than the past days.  The humidity dropped markedly and the winds were perfect.  Well, actually they were a little higher than predicted but still perfect for the new and larger kites we planned to fly.

We brought one of the two kites my husband received for Father’s Day.  He had said weeks before that he liked a butterfly kite.  So today he flew his own blue butterfly kite.

The slightly higher winds were perfect for the two larger kites we wanted to fly.  The first was the large skeleton kite that is a new release by Premier Kites this year.  They have three styles of skeleton kites in two sizes.  While I don’t normally go for big kites, on a whim, I did get the larger of the skeleton kites.  After seeing it in the sky, I’m glad I did.  The other kite was a one that has been in our bag for two years without being flown.  It is a square-headed dragon kite with a lion motif.  It is a beautiful kite made by Go Fly A Kite, a company no longer in business.

Don Dixon of Kites Unlimited just happened to bring along the black skeleton in the smaller size.  It took a little maneuvering but we got both skeletons to fly next to one another without tangling.  They looked pretty good together. 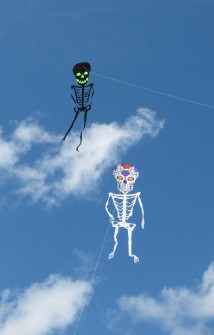 All the single line kites were flying so well, I took the opportunity to get my full-vent Kites Unlimited Rev out and get some much-needed practice.  And someone else took advantage of the fact I put the camera down.  I’ll have to be more careful where I leave it next time.