The weather has truly been against us as far as the community kite fly.  And this day was no exception.  Early morning rain, cloudy skies and high winds made it dark and gloomy and questionable for flying.  However, there were a couple of desperate people who were willing to take a chance and put a kite in the air.  I got some heavier line and flew my Illusion delta with its tube tails.  It handled the winds very well.  My flying buddy put up the little Spinner kite.  It just hung in the gusty winds and spun itself into a blur.  The line vibrated in a shallow repeating shallow sine curve.  It really is a fun little kite.  Because the temperature was mild, people were out walking the park.  And that little kite drew a lot of attention.

The kite build I began in the last post has been put on hold.  Instead, I am going to the Maryland Kite Society’s Kitemakers Retreat in Ellicott City, MD next month.  I’ve never been to this four-day kite building marathon and am nervously looking forward to it.  Several of my kite builder friends have been encouraging me to go, so this year instead of going to Kitemania in Florida, we’re going north.  The featured presenter is Ron Gibian and I will be making a kite of his design.  This is the 40th retreat so there are going to be some special activities.  The gem for a 40th anniversary is the ruby.  So one of the events is to build something with the anniversary/ruby theme.  So I am starting a banner with ruby gems on it. 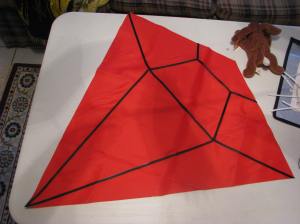 This banner was meant to be, as a friend of mine was clearing out her stash of fabric and gave me some large pieces of nylon banner material.  And, by coincidence, they were red and black.  I’m hoping this turns out well as I’ve never made a banner before.  So I’ve checked out some banner patterns and instructions and examined some commercial banners to see how they’re made.  I think my idea will work.  Keep your fingers crossed.

The Beanie Babies as weights idea was stolen from another kite builder friend.  My bean bag weights were packed away and I have two drawers full of these little creatures courtesy of my grown daughter.  Like most children, they leave half of their “stuff” behind when they move out to live their own lives.  I hung on to these and will have them for the grandchildren when they come to visit.  Maybe I can send them home a couple at a time until the drawers are empty.  Or at least reduced down to only the ones I’m using as weights.  What do you think?

All week long it was sunny or moderately so.  Then our community kite fly day arrives and it rains.  We have had enough rain this past fall and winter to last an entire year or more.  The only good thing about poor weather is that it forces me to get back to kite building.  I’ve had a pattern on my computer for quite a while now and have decided to put it on a rokkaku.  To make things a little easier, the width of the rokkaku is going to be the width of my fabric.  That way the sides will be parallel and I only have to cut the top and bottom points when the design is done.  And I only have to worry about centering the design side to side when I’m transferring it to the material.  Centering top to bottom can be done later. 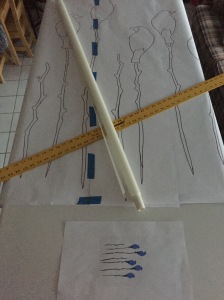 It will be a little tricky working on this kite as it is larger than my work table.  After making the modified edo, I told myself I wouldn’t make anymore large kites.  An yet, here I am again.  It will be approximately four feet by six feet, give or take an couple of inches.  I’m going to use a Ray Wong rokkaku as a plan for framing and bridling.  His always fly well and that may reduce some of my trial and error later.

I really wanted to do this kite in the blue that was on the drawing.  However, I don’t have a good middle hue blue that would work.  So I’ve decided on a teal and a golden yellow.  Don’t panic!  The branches and bird accents will still be black.  You’ll just have to wait to see what the golden yellow is for.

And so the project begins.  Wish me luck.

After missing the New Year’s Day kite fly on the beach, we made it out this past weekend for our first kite fly of 2019.  The day was sunny, relatively warm with light to moderate winds.  The regular kite flyers were there and a couple of our out-of-town flyers had come down for an extended holiday.  There were so many kites in the air you would have thought it was a festival.

I spent most of the time photographing the kites and catching up on what flying I had missed over the New Year’s holiday.  They all told me it was the best fly ever.  I hated to miss it but I must admit grandchildren rate higher than kite flying.  And we had a great visit (and second Christmas) with ours.

The highlight of the fly was a group flight of the Randy Tom warrior princesses.  Several of us have purchased Randy’s kites over the years and we just happened to have them in our kite bags.  I am happy to say I have two of the warrior princess kites and both of them were in the air on this day. 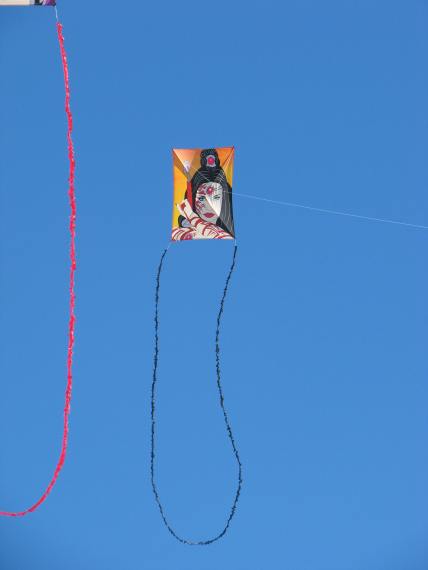 Before leaving I brought out my Rainbow Revolution quad line kite.  It’s a special kite I got from a friend and don’t fly it very often.  Because I was flying it, there was no one to get a photo.  I guess I’ll just have to work out a remote camera arrangement.  Though I’d rather carry extra kites than extra camera equipment.

It was a grand day and we stayed longer than usual, enjoying the sunshine.  Here’s to hoping that it is a sign of more grand days to come.